JS FAST Mover is a efficient and proficient moving company that offers full range of relocation, disposal, packing and transportation services. We provide intelligence and manpower services to ensure entire relocation process is smooth and free of hurdles.

We believe that our experience gives us the confidence and will ensure the relocation a stress-free, smooth, secure and enjoyable process. Our professionalism, meticulous strategy and reliability, making every of our client’s move a success story. We believe in building long-term relationships with our clients.

We have developed a approaches to meet the relocation needs of our clients, named it JS FAST MOVERS Process, this simple three-step process enables us to Discover, Discuss and Deliver the positive outcome that fit any customer requirements. Discover is the process of on getting the details of our client relocation request prior organize the move. Therefore, we will did a site survey to understand the actual needs. We will Discuss and communicate internally and externally to facilitate the necessary resources and equipments that fit for the relocation needs. Eventually, with everything in place, we will Deliver your equipments safely and professionally to your destination.

We are deeply committed to our customer and we would like to assure all our existing and prospective clients that we are and always provide finest relocation services. 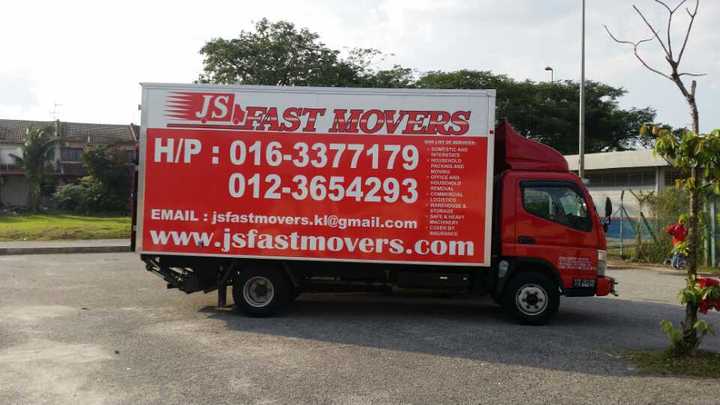 Worst ever movers, came with inexperienced movers, with no trolley. Damaged my furniture, summore dare to threaten me. Please dont ever use these movers, beware of their nonsense.

This guys were two hours late, out of two manpower one was hardly speaking English, wrapping was done in an awful way which caused damage of furniture...

After my complaints the guy who was supposed to be owner offered a discount of 50RM!!! and then time came to pay for their services, he said no discount as the price is already low...........

I have everything in WhatsApp as well as pictures of damaged furniture, for those who might be interested.

Terrible service, misjudged capacity needs and then failed to show up twice for second trip - cancelled in the end. Best avoid

Delivery agent has contacted me today to say there was a death in the family hence out of contact and could not facilitate. Please ignore above feedback; they were very apologetic - would consider using again. Thanks

thank you sir for the review

thank you ms for the review

Seriously I won't recommend this Pro.
The quote saying 3 helpers for carrying stuff, came only 2 persons. Their office telling me their staff all Malays, turn out 2 indians, which was no issue for me but why does the admin lie? The movers were not careful during the moving stuff, one point I have to tell them to separate the drawer from wardrobe cause they drag on floor& looks like my wardrobe will bend by the time it reached destination. They Dropped my clothes in 1 of the drawer even though I have already covered with paper & tape, I only saw the evidence of crumbled clothes, suspect they carry drawer side way, does it make any sense? Luckily my other rack was wrapped in film. At destination the lift is working, just that it does close by itself & the guy keep complain & wana charge me RM150 for this?? Come on, not that the lift is not working. At first I told him at most i pay extra RM50 that is it, 2 pax with 100m distance from origin to destination house, with lift, RM400 is more than sufficient. The job overall including the truck moving, done within 2.5hrs. The mover even threatens say "you don't want to pay? I know where you stay", then when i hand him rm50 he took it & toss it on floor. I even told him to respect money since it is hard sweat earn.
All and all it was terrible experience. This never happens during my last moving which was 5 yrs back. Btw I was expecting the truck with their company logo as shown in their profile, turn out it was not the same as shown in picture.

Hi Ms song that day you order 3 tonne lorry things but my lorry reach your places your things not should be enough for 3 tonne that is 5 tonne lorry things that also we not any additional charges for you we just follow what price we are agree to you..we just add additional charges because your lift is so small we not choice to drop in lift we must use staircase only then only we will charge for you RM 100.00 then you also agree to us RM 70.00 last minit when the job done time we ask about the RM 70.00 you are the one make problem with my driver.after that in recommend you are mention we ask RM 150.00 please don't deceive in the review. we also doing this business all most 9 years so we no how to handle my customer.we also got evidence my driver got take picture every think.so please don't make so many story.

very disappointed for their service, although there is a prompt reply from supplier, supplier misjudge estimation, so there is not enough space to deliver in one time, forced to deliver 2 times with extra charges. when supplier moving things and left some mark in wooden floor, but the supervisor denied is their problem, and advise to clear it by myself . supplier keep asking for cash payment instead of pay through recomn pay, I claims that will settle the payment through recomn pay, but end up supplier keep asking for payment like every half hour will give me a call to ask for bank in payment.strongly disappointed on their service